The film begins with Langer describing his entry into the field of Holocaust testimony, then traces his discovery of misleading assumptions about the nature of survival and the role of the imagination in bringing history to life. Brief comments by Fortunoff Video Archive co-founder Geoffrey Hartman and painter Samuel Bak expand on issues and themes of memory. The film ends with Langer’s conclusions concerning the vital role of testimony in our understanding of the Holocaust and the world around us.

Few people have had as dramatic an impact on our understanding of Holocaust witness testimony as Larry Langer. His books—many of them New York Times and Critics Circle notables—offer perspectives on a topic too often submerged under peripheral agendas of heroism, bravery, the “human spirit,” and the urge to find redemptive messages where none exist. For sixty years, Larry’s uncompromising warnings about such detours away from reality have served to protect the field of Holocaust study from deteriorating into a shallow view of history not as it was, but as we might naively have liked it to be. Since 1999, my privilege has been to have Larry’s editorial oversight on Holocaust-related films and books. It has not always been a pleasant experience—his sharp words cut deep—but I cannot recall an instance where his comments were wrong. –Joshua M. Greene, Vlock Fellow 2022

Joshua M. Greene is the producer of a dozen documentaries for PBS, Discovery, and a variety of overseas networks. His biographies of survivors and other witnesses to the Shoah have sold more than a half million copies worldwide. He is the recipient of numerous awards for literary excellence and was honored by the New York Public Library’s Distinguished Authors series. He is a frequent speaker at government, educational, religious and community venues. His editorials on war crimes and Holocaust memory have appeared in the New York Times, the Chicago Tribune, and the Los Angeles Times. He has been a consultant for National Public Radio and Fox News, among other national media. Mr. Greene earned his graduate degrees at Hofstra University and has taught Holocaust history at Hofstra and Fordham Universities. Mr. Greene serves on the Board of Advisors to the Fortunoff Video Archive for Holocaust Testimonies.

Shiva Kumar, an award-winning director and editor, has worked in documentary, broadcast and commercial filmmaking for over 25 years. In collaboration with his production partner, Joshua Greene, Shiva’s films for PBS include “Witness: Voices from the Holocaust, “Hitler’s Courts: Betrayal of the Rule of Law in Nazi Germany” and several animated children’s specials. “Memory After Belsen,” on the future of Holocaust education, is distributed through Amazon Prime. Mr. Kumar is also an actor and has appeared in Quantico, Madame Secretary, Law and Order SVU, All the Queen’s Men, Billions, and Succession. He is author of science fiction and fantasy novels including the The Lanka Chronicles, a South Asian fantasy inspired by the classic epic Ramayana.

Lawrence L. Langer is Alumnae Chair Professor of English emeritus from Simmons College (now Simmons University) in Boston, from which he retired in 1992. He is the author of numerous books and articles on Holocaust literature, memoirs, testimony and art, including The Holocaust and the Literary Imagination (1976), which was one of three finalists for the National Book Award. His Holocaust Testimonies: The Ruins of Memory (1991) won the National Book Critics Circle Award for criticism and was named one of the ten best books of the year by the Sunday New York Times Book Review. His most recent work is The Afterdeath of the Holocaust (2021). He has also provided extended critical commentary for twelve volumes representing the artistic achievement of child Holocaust survivor Samuel Bak , whose titles include Landscapes of Jewish Experience (1997), Return to Vilna (2007), and From Generation to Generation (2016). In 2016 he received the Holocaust Educational Foundation Distinguished Achievement Award for Holocaust Studies and Research.

This 45-minute documentary, produced as part of the Vlock Fellowship Film Series, explores the career of distinguished Holocaust scholar Lawrence L. Langer in interviews juxtaposed with witness testimonies from the Fortunoff Video Archive. Produced by Archive Advisory Board member, author and filmmaker Joshua M. Greene, the film highlights Langer’s critical insights into the power of testimony to bring those who were not witnesses to the Holocaust inside the experiences of those who lived through it. The film features archival footage and photographs that illustrate points under discussion. 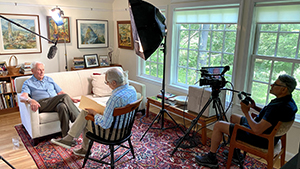